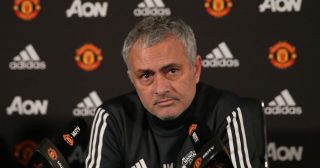 Jose Mourinho revealed in his pre-match press conference that all Manchester United players are fit for Saturday’s Premier League encounter at home against Crystal Palace.

A number of players stayed in Manchester during the internationals to recover from injuries or any knocks picked up prior to the recent break, including Anthony Martial and Marouane Fellaini, with both players set to play tomorrow.

Martial is in the form of his life at the moment and Mourinho states how hard he worked while the rest were on international duty.

Fellaini didn’t leave to go with Belgium despite playing 90 minutes in the Manchester derby in United’s most recent game.

The boss said the following ahead of Saturday’s match, as per Manchester Evening News: “Martial stayed with us, he didn’t go to the national team, the national team was aware of his problems and with permission he stayed, he worked really hard on that.

“I like to kill that a pre injury because problems in the muscles around it, they are a dangerous situation and he was in a pre-injury situation, he worked really hard, he’s ready for tomorrow, he plays for tomorrow, is he ready to play three in a row in the same week I don’t know but the most important match is the next.

“Fellaini also stayed, no national team, they also let him stay in spite of playing 90 mins against Manchester City, he needed to stay and prepare himself better after such an injury that he had before so Marouane is also good. and the boys in the national teams, Rashford came with a little problem but is ready, Lukaku is ready, I would say ready with a little bit of a risk but ready and Paul we knew with this break he would recover from that small muscular injury, so we don’t have players I can say are out of the game tomorrow, we have a huge 23 group to choose for tomorrow.”

However, it is worth noting that Luke Shaw will be missing due to suspension.

Mourinho was also asked whether he still thinks his team will be around the top four by the end of the year, an objective that most would have thought was easily achievable before the season began.

While United are some way off fourth spot – a total of 7 points – there is a chance with our Christmas run in that we’ll climb closer to the right side of the Premier League table.

It’s a shame to be talking about top four in November. We should be aiming higher than this.