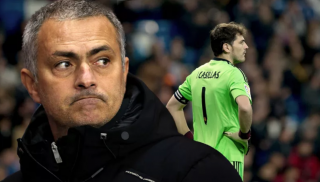 Jose Mourinho has been successful in every country he’s coached in.

Portugal, England, Italy and Spain. You name it, he’s gone and won silverware.

But it often comes at a cost. Whenever he’s been in charge, Mourinho has never been afraid to raise tensions or cause controversy. United and indeed other clubs knew that before appointing him as manager.

Mourinho’s tenure at Real Madrid – between May 2010 and June 2013 — saw several relationships with players left fractured and unrepairable.

But he still won the Copa del Rey, Spanish Super Cup and a La Liga title in a season which saw Los Blancos pick up over 100 points in the league.

Madrid legend Iker Casillas felt the wrath of Mourinho more than most players during that period and the boss would eventually replace him with Diego Lopez, who currently plays for RCB Espanyol.

In an interview with Spanish outlet AS, the current FC Porto goalkeeper opened up about his relationship with Mourinho and states that he wishes he had confronted the ex-Madrid boss.

“He was brought in to compete with Barcelona and brought moments of great tension and that Madridismo that I mentioned that I don’t like came out, there was a limit that he went to with me that I didn’t want to go to.

“The third year wasn’t all good. Although we won LaLiga and it seems that there were many people whose relationship was shaken.

“It wasn’t good for him, nor for me nor for the club. I think if it happened all over again, I would have taken the bull by the horns and faced Mourinho.

“At that time, I opted to be quiet and I thought that was the way to honour the values of Real Madrid.

“Nobody has wanted to talk about Mourinho to this day and I think it is maybe better to let it be and let it go.”

So, is he paranoid about dressing room moles or does Mourinho believe picking fights with key players will gain something? Trying to make sense of Mourinho during his time at United has been difficult, to say the least.