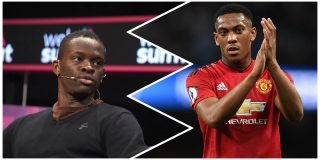 Martial’s time at United has thus far been a roller-coaster ride. In and out of the team, no league titles or decent runs in the UEFA Champions League (the sort of things young players expect when they sign for big clubs) but the former AS Monaco forward is currently reaching the form of his life.

Last season was arguably his worst and manager Jose Mourinho didn’t appear convinced by him. Martial’s agent even expressed his client’s wish to leave Old Trafford, as per The Guardian, which now has fans fretting.

Imagine where United would be in the Premier League had Martial left?

When he first signed for the Reds under Louis van Gaal, Martial went on to score an impressive 17 goals in his debut season, but the 22-year-old has had to prove his worth again under Mourinho.

Saha believes Martial is an integral part of United’s future plans. Following reports that Martial could move elsewhere to play his football, as per Goal, the former Red Devils striker told Sky Sports:

“Of course he needs to understand the long-term plan is there for him because it is a personal career – it is not only about the club.

“If you don’t play well you have to remember a club will transfer you and fans will start to boo. But that is not the case of Anthony, he is loved by the fans. He is loved by the manager I am sure.

“It’s an understanding, making a compromise in some ways, to make sure the player is happy and create a platform to win trophies again.”

Martial has worked his way back into the team this season, edging Alexis Sanchez out in the process, having found the net six times in his last five Premier League appearances.

“I think the situation was more about the actual understanding – sometimes you have a feeling something is missing; the players, the tactics,” Saha said of Mourinho’s selection calls.

“As a fan, as someone who has been there in the club and as a forward sometimes I was feeling the link between players was not there.

“He has been asked to take a lot of responsibility in the field because he is a tremendous player with a lot of quality.

“You could see sometimes his body language was wrong. But the last few weeks he has just been an immense player.

“Doing a lot of defensive work, celebrations that I have not seen before so he shows a lot of quality signs that you can be very happy about. If he can replicate that and impact other players around him it will be a massive change.”