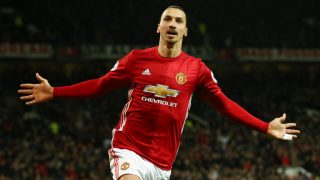 Zlatan Ibrahimovic was incredible during his first season at Manchester United.

The Swede, 35-years-old at the time, was a catalyst in a side that went on to win the Europa League and League Cup.

Ibrahimovic missed the Europa League final win over Ajax after suffering a serious knee injury that would put his United career into jeopardy.

Manager Jose Mourinho decided to keep the former Sweden international around for an additional year, though it didn’t work out and he left for MLS side LA Galaxy.

It was that season Romelu Lukaku had just arrived as United’s new centre forward. Now, with Ibrahimovic no longer around, Mourinho is no longer blessed with options if the Belgium international is ruled out for games.

In an interview with BBC Sport, Zlatan opens up on his time in England and how people he trusts tried to put him off coming to the Premier League. We’re certainly glad he ignored them.

“When I went to England I was talking to different players that I knew well and trusted that would give me an honest opinion. From all of them everyone said do not do it, they said it would not be good for my career because you put your whole career on one season. If you do not do a good season people will say the rest of the things you did before were useless because you didn’t make it in England, but that triggered me and that’s the challenge I wanted.

“I went against everyone and said that’s what I wanted to do. They thought I was too old, I was 35 and I made the Premier League look old. It took me three months to convince everyone who I was. That was the challenge and I never turn down a challenge.”

Ibrahimovic goes on to claim he misses all of the lads that he had a “fantastic time” with at United.

His view on Paul Pogba is an interesting one as he accepts that his former French teammate is “someone who needs to be guided.”

He also claims United made him feel like Benjamin Button because he felt like he was getting younger until suffering that knee injury.

“I miss all of them. I had a fantastic time at United. Wazza [Wayne Rooney], Michael Carrick, then the young guys that wanted to show the world who they are by playing football and they had a lot of hunger to show. I had a good time because I got to know everyone, I was the mature guy with all these guys who were not mature.

“Paul Pogba, I had never played with him before and I didn’t know him as a person. We have the same management and when I got to know him I got to find a fantastic person and a fantastic footballer, but someone who needs to be guided.

“He is a professional guy that works every game and never misses training or a game. Those are all the things that people do not see, you only get judged by what you can see on television or the 90 minutes in the stadium, that’s where you have to perform.

“When you click with someone it just clicks. The connection on the field was amazing, we helped each other very well, I needed him and he needed me. The first year at United we had a fantastic year.

“They made me feel like Benjamin Button. I was getting younger and younger, then unfortunately I got my injury.

“The Premier League should be happy I did not come 10 years ago because it would’ve been a different story. You see all my numbers [of goals] and all of these numbers would’ve been in the Premier League. I came to the right club in United. It was the club and the shirt that I was supposed to shine in and I did it.”

Read Ibrahimovic’s full interview on the BBC Sport website. He also speaks about the injury he suffered as a United player, life in LA, and, erm, his feet!