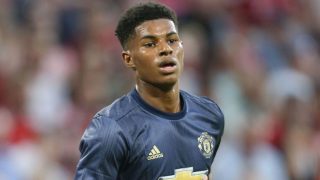 Marcus Rashford is set to throw Manchester United a dilemma.

According to The Sun, Real Madrid have made contact with Rashford’s entourage as they appear to be considering a move for the £50 million-rated forward, while those at United will be worried that he could be open to a switch if he doesn’t get a permanent spot in Jose Mourinho’s team.

Rashford is up against Anthony Martial and Romelu Lukaku for a starting place and has yet to find a breakthrough, so why would he think life will be easier at Madrid? They’re already being linked with stars such as Harry Kane and Eden Hazard, as per iNews.

While French teammate Martial has hit top form, if Rashford can’t get ahead of Lukaku (who has been absent through injury) as the centre-forward, there’s something wrong.

Alexis Sanchez was preferred as the striker in recent weeks, when it would have been a good opportunity for Rashford to get another run in the role to prove himself.

Netting 20 times in their opening 12 La Liga games, Madrid are struggling to find a viable solution to cover the void left by Cristiano Ronaldo after he left for Juventus in the summer.

Rashford is not at the stage where he can replicate Ronaldo’s goals but his pace, movement and finishing ability has not gone unrecognised.

This won’t go down well at United, though we must realise Rashford will be looking at this from a career point of view. Moving to Madrid is unlikely to see him given more starts unless Los Blancos agree to play him through an important part of his development.