Before the international break, a humbling defeat at the hands of Manchester City halted Manchester United’s recent progress up the Premier League table. Jose Mourinho’s outfit will be looking to recommence their top-flight progress against lowly Crystal Palace.

A home win over relegation contenders would help United reduce the seven-point gap between them and the Champions League places. With that in mind, here’s who you can expect to start on Saturday.

The Spaniard could do nothing but watch as Manchester City’s fluid attack fired three goals past him at the Etihad last time out. In a stretch of poor form for United, David de Gea remains the only staple in the side and, barring injury, will start against Crystal Palace.

Mourinho has plenty of options to choose from at right-back.

Antonio Valencia revealed that he was dropped, as per Bleacher Report, after poor form allowed Ashley Young and Diogo Dalot to surpass him in the pecking order, but he could now return to the side.

Young will probably move to left-back due to Luke Shaw’s suspension against City, and Diogo Dalot has been deprived of Premier League football in what seems like an attempt to protect the youngster from the rigorous English first division. He is more likely to play against Young Boys, leaving Valencia to start ahead of Matteo Darmian against Crystal Palace.

Despite being tormented by City’s attacking masterclass last time out, Chris Smalling remains the favourite to start at centre-back against Crystal Palace. Phil Jones and Marcos Rojo only recently returned from long-term injuries, and Eric Bailly has seemingly been shunned from the starting XI, making Smalling a natural choice.

Substituted due to injury against Turkey, Victor Lindelof made an excellent return to Sweden’s side, scoring in his side’s 2-0 win over Russia. He has made progress over recent weeks, with his ball-playing ability greatly improving United’s transition football.

The past few weeks of form have served only as further proof of everything we already know about Young. He is past his prime and not a fullback by any means, as shown by his pending new contract, but he has been a success under multiple managers at Manchester United. He will surely start on Saturday, even if not at left-back.

It seems that Nemanja Matic cannot be dropped despite his inability to produce an acceptable performance this season in 14 attempts.

Mourinho lamented his ‘need’ to play Marouane Fellaini in Pogba’s absence against City and the Belgian returned to United training on Tuesday without fitness or hair, effectively ruling him out.

Ander Herrera was as disappointing as Matic against City, and despite being instrumental in United’s preceding victories, his surprisingly poor performance at the Etihad will count for more in the manager’s mind.

Matic will have to play unless Scott McTominay replaces him. Mourinho will play Lindelof in midfield before using a combination Andreas Pereira, Juan Mata, Fred and Paul Pogba in midfield.

Normally deployed from the right-wing, Juan Mata played in central midfield against the likes of Chelsea and Juventus and improved the side’s fluidity even though United didn’t win either match. Given Mourinho’s reluctance to play Fred in the Premier League due to his ongoing adaptation and Andreas Pereira’s omission from the team since August, it is likely that Mata will return to the side.

As adept at linking up with players as he is quick at cycling possession and keeping the ball in flow, Mata should make up for Matic’s laborious performances of late and allow Pogba the space and time to be a creative threat. Palace will also fear committing fouls around the box with him on set-piece duty.

Missing out on the Derby with a niggle that resulted from persevering through the Juventus match, Pogba looks likely to return to the fold against Crystal Palace. His goals and assists from midfield have been crucial for United at times this season and he is one of the first names on the team sheet when fit.

Scoring twice during the break after struggling for United, Lingard once again proved that United’s system is the problem, not the majority of the club’s expensive attacking players. Romelu Lukaku and Marcus Rashford picked up injuries for their respective nations and will likely be given a rest this week.

The aforementioned absentees leave Alexis Sanchez as the prime candidate to start the match. Sanchez has not had a great tenure at United but few forwards have under Mourinho, and if chances are created, he remains one of the best at the club when it comes to putting the ball in the back of the net.

Pulling out of France’s international fixtures with a minor injury after burying a penalty against Manchester City, Martial was pictured in training on Tuesday. Having scored six goals in his last five matches, the October player of the month is currently United’s best player and Mourinho would pick him for Saturday’s match if he is even close to fully fit. 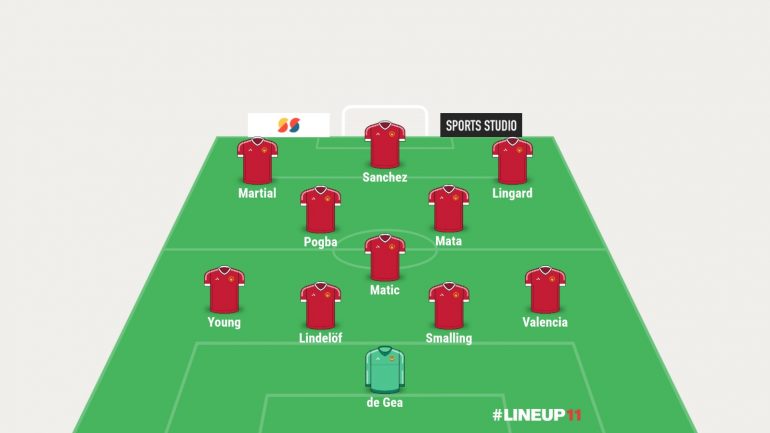 We have to believe and have confidence in winning trophies, says Raphael Varane
Erik ten Hag says Lisandro Martinez could be utilised in midfield to accommodate injuries
‘I always wanted to come here’ – Marcel Sabitzer mesmerised by Old Trafford back in 2020