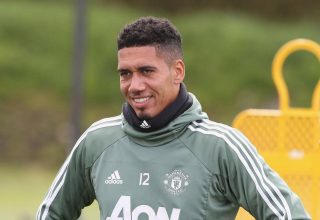 This will put you in a bad mood.

According to Sky Sports, Chris Smalling has opened talks with the club about a new contract.

Unless Smalling signs a new deal with the club, he will be able to leave on a Bosman at the end of the season with his current contract set to expire.

The report understands that the club remain in talks with David de Gea, Ashley Young, Juan Mata and Ander Herrera over fresh terms. That leaves the futures Antonio Valencia, Phil Jones, Andreas Pereira and Matteo Darmian in serious doubt with all of the players mentioned reaching the end of their existing deals.

Smalling, who signed for United from Fulham in 2010, has been a regular in Mourinho’s team this season. That goes some way to explain our defensive woes, and handing the England international a new contract will only prolong our problems at the back.

Talk about underwhelming news after The Mirror links us with a move for Inter’s Milan Skriniar. The Daily Mail’s report on Everton wanting to sign Smalling even made for easier reading.

United should be aiming to get rid of the deadwood in the squad and sign world-class players to improve their problematic areas. The defence sticks out like a sore thumb and Smalling has contributed to that for years.