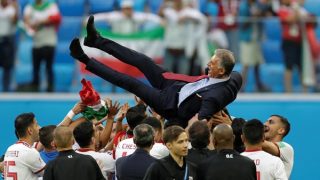 Miguel Delaney of The Independent revealed on Wednesday night that sources close to the Portuguese manager indicate he wants the job. This update was brought to people’s attention on the same day O’Neill and former United captain Roy Keane parted company with the FAI.

Queiroz has done an incredible job as Iran manager, taking the nation to two World Cups, as well as winning three underage competitions with Portugal in 1989 and 1991. His managerial career in international football speaks volumes and such feats saw Queiroz manage the Portugal senior side twice, become Manchester United assistant twice and Real Madrid manager in 2003.

Though it looks like the Portuguese coach faces stiff competition from former Republic of Ireland manager, Mick McCarthy, with Steve Bruce also considered a contender by the bookmakers, as per SportsJoe.ie.

Irish fans understandably became sick and tired of the football and lack of progression under O’Neill. The style of play would put an insomniac to sleep and while people complained that the players weren’t good enough, all you need to do is look at the job Michael O’Neill has done with Northern Ireland.

There were also tensions in the squad after Stephen Ward’s WhatsApp voice message made it’s way online, shining Keane in a bad light for his bully like behaviour towards Bournemouth grafter Harry Arter, as discussed on Off The Ball.

And, if Queiroz does get the job, current squad members can rest assured knowing he would be incredibly unlikely to ask Keane to be involved.

Keane was still playing for United when Queiroz worked as Sir Alex Ferguson’s assistant. The Guardian picked up on some quotes from Keane’s autobiography about a row in which loyalty was brought up.

“He was just on my right shoulder; how I didn’t fucking hit him again – I was thinking, ‘The villa in Portugal, not treating me well in training – and he just used the word “loyalty” to me,’” said Keane.

“I said, ‘Don’t you fucking talk to me about loyalty, Carlos. You left this club after 12 months a few years ago for the Real Madrid job. Don’t you dare question my loyalty. I had opportunities to go to Juventus and Bayern Munich.’ And while we’re at it we spoke about training downstairs. And were just on about mixing things up in training a bit.”

However, O’Neill’s reign as Republic of Ireland manager wasn’t always disastrous. The former Celtic and Aston Villa boss led the nation to a European Championships, but it all turned sour after failing to qualify for last summer’s World Cup and the manner in which performances suggested players had no idea what to do when there was a chance to take the ball forward.

Football matches are won by scoring goals. Ireland don’t score often enough which would explain the shocking statistic that, under O’Neill, they’ve won just one in their last 11 matches, as per Roy Curtis for the Irish Independent.