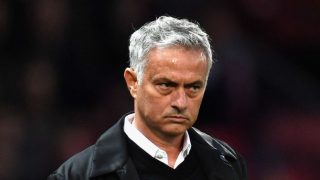 Romelu Lukaku has given the perfect response to teammates that may or may not have had arguments with Manchester United boss Jose Mourinho.

The former Chelsea forward appears to be close to the boss, even though he was dropped for the recent 2-1 win over Everton, with Mourinho previously praising his ‘sergeant’ for having a ‘phenomenal’ attitude, as per Sky Sports.

There have been reports this season of unrest in the dressing room. The Daily Mail explain how Sky cameras got in to film Mourinho’s alleged bust-up with Paul Pogba on the training ground.

But Lukaku doesn’t seem arsed about any of that.

He tells his teammates ‘you’re a grown-ass man, deal with it’ and I think Mourinho would appreciate that stance from one of his most important players.

There’s a feeling footballers have become more sensitive and that the savage money in the game has granted them an increase in power; nearing the stage of an upper hand over their coaches, and that cannot be healthy for dressing rooms up and down the country.

Lukaku is right not to let it bother him. Right now, the Belgium international needs to focus on reaching top form again and hitting the back of the net.

Everything gets exaggerated nowadays…