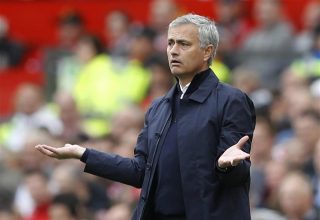 It’s not going to plan for Romelu Lukaku so far this season and Jose Mourinho has been blamed for his striker’s lack of form.

Lukaku started the season as he’d hope it would continue with early goals – but the forward has not netted for his club since September and was dropped against Everton recently.

He has also faced injuries this season and missed the Manchester Derby as well as the recent international break as a result.

But former Chelsea ace Tony Cascarino has put his performances down to not getting enough recovery time following the summer’s World Cup, which saw Belgium reach the semi-finals. He references current Stamford Bridge boss Maurizio Sarri’s handling of Lukaku’s compatriot Eden Hazard as an example United manager should have adopted with his player.

And, it’s not as if Mourinho has plenty of goalscoring options in his squad. He needs to make sure Lukaku is fit and ready throughout the season, and Sarri’s handling of Hazard is easy to look back on in hindsight as a masterstroke. If Chelsea lost the games Hazard didn’t play in, I’m not sure Cascarino would be able to sing from this hymn sheet.

“I watched Belgium play Brazil in the quarter-finals and it was clear that Romelu and Eden were giving their absolute all,” he said in  The Times .

“I don’t think I’ve ever seen Hazard work so hard in a game.

“Fast-forward to the start of the season and he was eased into the Chelsea line-up by Maurizio Sarri, playing 14 minutes in their first game against Huddersfield Town and then 29 minutes against Arsenal.

“Sarri realised that Hazard needed a rest so he took him out of the firing line.

“The same cannot be said for Jose’s management of Lukaku.”

In fairness to Cascarino, Lukaku has looked worn out this season and our position in the Premier League table – eight, with a massive 12 point gap between us and leaders Manchester City – is a consequence of Mourinho’s conservative approach.

That conservative approach isn’t the sole reason but United don’t create enough opportunities in front of goal and that makes life more difficult for the centre-forward.

“He came on as a substitute in their opening match against Leicester City but then played every minute of their next 12 matches, despite his form wavering and him looking short of fitness,” he added.

“Modern-day players do everything they can to be as fit as possible and, because they work so hard during the week and in matches, injuries become inevitable.

“Someone has to step in and protect players when they are with their clubs, the manager or the medical team.

“It is no surprise that the three unbeaten teams this season are ones at which the managers are juggling their squads.

“Sarri has used Hazard wisely, Pep Guardiola has rotated his Manchester City midfield to keep them fresh and, at Liverpool, Virgil van Dijk and Georginio Wijnaldum have been outstanding.”