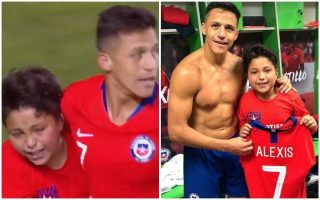 We might have become fed up with Alexis Sanchez failure to replicate his form from Arsenal at Manchester United, but the Chile international deserves praise for showing class in a recent international fixture against Honduras.

The 29-year-old had a penalty saved before converting the rebound in the 4-1 win. It was the second penalty Sanchez missed for Chile in as many games, so hopefully it hasn’t hindered his confidence further and he can start performing and winning games for United.

However, when Sanchez celebrated a young fan made his way onto the pitch. He slipped in the process and crashed to the floor, as seen in the video below.

Sanchez attempted to comfort the pitch invader and helped him get back on his feet. The youngster, however, was reduced to tears and the United star didn’t stop there.

The Chilean posted an image to Instagram of the young fan in the dressing room with him after the match, where he handed over his shirt and boots as a gift.

So, he didn’t only make it on the pitch to share a moment with Sanchez, he also got into the Chile dressing room at full-time.

💫la Inocencia de los Niños es una de las cosas más Lindas , 😊❤⚽ 💫 the innocence of children is one of the things most beautiful 😊 ❤⚽