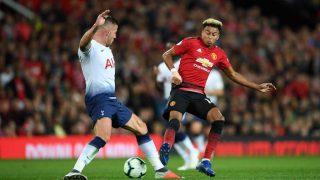 Jesse Lingard has revealed he enjoys watching videos of Barcelona’s legendary duo Andres Iniesta and Ronaldinho, and it has made us wonder if he uses either or both players as inspirations to model his own game.

Lingard became an important first-team player at United after getting his real break in the team under Louis van Gaal, but it seems he’s always been in the good books with Jose Mourinho too.

United will have the last laugh if Lingard can replicate the genius of Ronaldinho, who was so close to joining the club from Paris Saint-Germain in the summer of 2003, as per The Mirror.

Even though Iniesta is now playing in Japan with Vissel Kobe, Lingard still takes inspiration from the midfielder.

Interviewed for Manchester United’s official website, he was asked what he watched on YouTube to relax: “Football videos and things like that, music videos as well,” Lingard said.

“They are the main things I watch on there. Clips of Ronaldinho, clips of Iniesta, I love things like that.”

Lingard scored a tap-in for England against Croatia on Sunday. When he came on from the bench to replace Marcus Rashford, the Three Lions were trailing by a goal. It was his equaliser that saw Gareth Southgate’s men comeback to win 2-1 and top their UEFA Nations League group, with Spain finishing in second place.

United host Crystal Palace on Saturday and we are yet to hear from Mourinho on what players will be out through injury. However, given his importance for England over the international break, the boss may look ton hand Lingard a start against The Eagles.

Lingard has made five Premier League appearances so far this season.