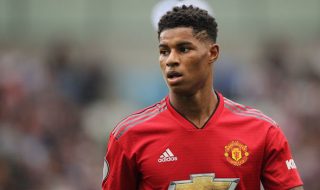 Marcus Rashford’s future was being discussed on talkSPORT when host Micky Gray stated his belief that the Manchester United star should consider heading to Italy.

According to The Times, Juventus are said to be monitoring the 21-year-old after asking officials to check the player’s background and character.

Meanwhile, The Sun claim Real Madrid are plotting a £90 million double raid on the Premier League in a deal that they wish to include Rashford and Tottenham Hotspur ace Christian Eriksen.

But talkSPORT host Gray doesn’t mention Real Madrid in his Rashford rant. He thinks the England international should head to Italy because he’s not getting the right opportunities under Jose Mourinho at United.

As quoted by the Manchester Evening News, Gray side the following: “Since Rashford came into the Man United team four seasons ago, he’s been taken off in 50 per cent of the games he has started. He has also never finished a game, never played 90 minutes, when he has played as a striker.

“I believe he is being held back and that has to be down to the manager and the system Man United play.

“Jose said when he played the other week against Newcastle that Rashford looked sad, and it shouldn’t be like that – he’s a Manchester boy, he should be loving his football but he’s not.

“I firmly believe he is a better centre-forward than Romelu Lukaku.

“I think Rashford is a better player, he’s got the complete game and he should be in the starting 11 in that role.

“United fans are getting frustrated with Lukaku – his first touch is letting them down, they try to play everything through Lukaku and it just bounces back.”

🗣 “Marcus Rashford is a better centre forward than Romelu Lukaku.”

🔴 “Rashford is being held back at United and I think he will leave.”@MickyGray33 isn’t holding back 👀 pic.twitter.com/PjdvnDLTMu

This isn’t the first time Rashford has been advised to jump ship.

Former England striker Alan Shearer previously expressed his fears that Rashford is playing too many games out of his favoured position, in an article for The Sun back in September.

While the Newcastle legend doesn’t advocate Rashford moving away from Old Trafford, it’s clear that he agrees with bits of what Gray says…