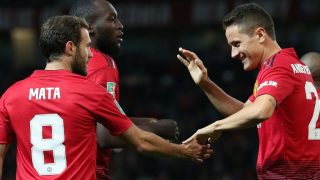 In an interview with Manchester United’s official website, Eric Bailly has revealed Juan Mata’s nickname at the club.

The Ivory Coast international stated that Mata is known as ‘The Wizard’ for his the magic he produces on the pitch.

“Mata is known as The Wizard,” Bailly said. “It’s magic. He is someone who has talent, technique – he’s a great player, and also a great person.”

The Spaniard always comes across well in his weekly blog and is a joy to watch when he’s in form, and he has produced some of our best moments since arriving as a David Moyes signing in 2014.

It remains to be seen how long both players – Bailly and Mata – have left at Old Trafford. Radio host at talkSPORT, Adrian Durham, believes the Spain international is set to leave United for Arsenal on a Bosman, while Calciomercato state AC Milan and Paris Saint-Germain are both monitoring Bailly’s situation at the club. They cited a Daily Mail report for PSG’s interest which also stated that the defender has become frustrated with his lack of playing time under manager Jose Mourinho.

United should fight to keep both players and ensure Bailly has a future in the starting line-up. Mata is also arguably Mourinho’s most creative player, so a side struggling to create opportunities could do with playing him more often.

Chris Smalling, who shouldn’t have a future at United, is starting each week alongside Victor Lindelof. While the Swede is improving each week, Smalling has stalled for years and is a constant liability at the back.

Even if Mourinho doesn’t believe Bailly and Lindelof is a formidable defensive partnership, it can’t get any worse than it is, and both players deserve more opportunities. Smalling has had more chances than a cat has lives.