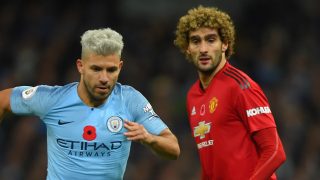 Manchester City are flying under Pep Guardiola, on course to win back-to-back Premier League titles, with the aim of improving fortunes in the UEFA Champions League.

Manchester United under Jose Mourinho remain the sleeping giant they were in 2016 when the Portuguese tactician first took the job.

There’s certainly a gulf between the two rivals, one that has never been larger in City’s favour, as seen in the recent Manchester Derby when the Reds looked a million miles off Guardiola’s men.

From the manner in which they keep the ball, attack in numbers and with fluidity, it’s easy to see City are enjoying themselves. It doesn’t appear to be that way at United but one player doesn’t feel the difference is all that significant.

Speaking to Sky Sports, Fellaini claimed that the emergence of the big six has made the Premier League more competitive, as opposed to there being a big four. (Maths must be strong point for the Belgian)

He was asked whether the derby defeat showed an ever-increasing gap, to which he replied: “I don’t think so. I remember when I arrived in England it was a top four, now it is a top six, so every year it is more difficult.”

“Next season we will see how it changes and in two and three years I think every year it is more difficult, the intensity is higher, so that’s why the Premier League is attractive.

“Manchester City are strong, but I think they will lose. Ok, they are very good and they have good players but it’s possible to beat them. We lost, but we have the second game at Old Trafford and we will see.”

City won the Premier League last season by a 19 point margin from runners-up United. They’re already 12 points clear of us and we’ve dropped from second to eight!

Mourinho’s men have set themselves a massive task to mount of a title challenge, though Fellaini is probably the only one who thinks that remains a possibility.