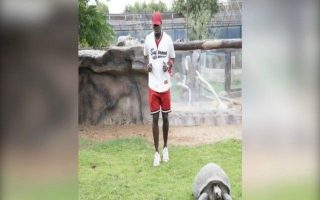 Paul Pogba took to social media on Sunday to poke fun at his own penalty kick style by racing against a tortoise.

After missing Manchester United’s 3-1 derby defeat through injury, which saw him ruled out of international duty the past week, Pogba went on holiday and raced against a tortoise.

However, according to the Evening Standard, Pogba should make a quick enough return to action when Crystal Palace visit Old Trafford next Saturday. Quicker than he is to take a spot-kick…

The 25-year-old has posted a video on Instagram on Sunday to joke about his infamous penalty technique, running towards the ball slowly in attempt to deceive the goalkeeper through impatience.

Pogba wrote the caption as “I’m not THAT slow.”

How do people come up with this stuff? Then again, he did have a lot of time on his hands the past week…

Watch the video below, as the favourite wins.