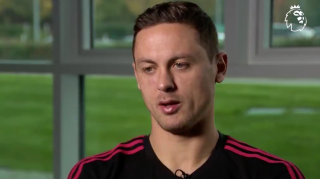 Martial’s future came under question at the start of the season, but once he edged Alexis Sanchez out of the team the former AS Monaco attacker became one of Jose Mourinho’s most important players.

If he can build on that over the coming months and years, Martial will be one of the best attackers in world footballer. We just hope he displays that at United rather than elsewhere.

Martial has scored in United’s last five Premier League games in a row. He will aim to build on that this weekend against Crystal Palace at Old Trafford.

However, Matic was asked about his teammate in an interview for the Premier League, explaining that he feels Martial could improve.

Martial has had his struggles with consistency in the past, but Mourinho and the player’s teammates will hope that’s not the case this season and he continues to drive United forward.

Matic was also asked if he agreed with Mourinho in saying United will be in a better position by Christmas.