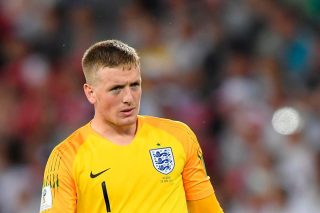 Gary Neville does not sound overly convinced about Everton and England goalkeeper Jordan Pickford, amid reports linking him with a move to Manchester United.

The Sun claimed on Sunday that Jose Mourinho is a long-term admirer of the £60 million-rated Pickford and sees him as a suitable replacement for David de Gea, with the Spaniard yet to agree to fresh terms at Old Trafford.

However, Stretty News writer Jamie Spoor shared a similar opinion to Neville, and stated that he would prefer if United replaced Spanish Dave with Atletico Madrid’s Jan Oblak or Barcelona’s Marc ter Stegen – two goalkeepers often compared with the best, a level above the Everton shot-stopper.

The situation with David de Gea is likely to leave United feeling anxious. He has yet to sign a new contract and the Daily Star believe Juventus are plotting a free transfer with the current United no.1.

However, United can trigger a 12-month extension at the end of the season to keep De Gea at the club for a further year, though when that expires he is available to leave for free.

Neville admits Pickford makes him “nervous” and is unsure England’s first-choice goalkeeper is the right fit for United.

“I thought he was a risk before the World Cup,” Neville told Sky Sports. “It was one of the points I was most nervous about.

“I actually think international football suits him a lot in the sense of the way the team play. I think the fact you get more time to play out from the back than you normally would in the Premier League.”

Though Neville adds that Pickford is “winning me over slowly” as time goes on. He has become an integral member of the England squad after the Three Lions reached the World Cup semi-finals this past summer and, moreover, they’ve just reached the UEFA Nations League finals after topping Group A, with Croatia relegated as a result.

Neville also says the 24-year-old is not as “dominant” as a keeper should be, despite possessing a great shot-stopping ability.

“He’s not my idea of what a goalkeeper would be. I always thought a keeper should be dominant,” added the United icon.

“There are so many keepers now of his ilk and his stature and his ability in terms of agility that you have to change with the times.

“I was always of the Peter Schmeichel [style of goalkeeper], the big presence. He [Pickford] doesn’t look huge in goal but is agile and does make great saves.”