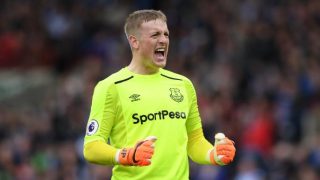 As reported by The Sun amid ongoing speculation over the future of David de Gea, Manchester United have made Jordan Pickford a surprise target as the Spaniard’s replacement.

The Reds appear no further forward in tying Dave down to a new deal, with Juventus well placed to snaffle him up on a free transfer should he leave in the summer.

Jose Mourinho is thought to be a long-term admirer of the Everton keeper – widely regarded as one of the best young keepers in Europe after a series of impressive performances for both club and country. Pickford has solved England’s goalkeeping problem and is firmly established as Gareth Southgate’s number one.

According to The Sun’s report, it is thought that United would need to spend £60 million to prise the goalkeeper away from Goodison Park. He signed a new deal in February but it would hard to resist if The Reds came knocking.

It’s thought that Jose Mourinho likes his ability to play out from the back with confidence and orchestrate an attack with his distribution.

The reported fee would make Pickford the third most expensive keeper ever. He is already the most expensive British shot-stopper in history having swapped Wearside for the blue half of Merseyside for £30m in 2017, as per the BBC. The move came after he shone as a lone beacon of hope in an otherwise darkly depressing season for relegated Sunderland under David Moyes the previous season.

This is the first time that Pickford has been touted as a potential future United keeper and few – myself included – saw this coming. It is a surprise. There is no doubt that he is as good a shot stopper as most of his Premier League peers and, similar to De Gea, he’s a strong and solid ball playing keeper. Like all keepers, he is prone to the odd error – an occupational hazard for the position – but has no outstanding weaknesses.

As the only genuine world-class player in the squad, De Gea should be replaced by someone of similar clout. The likes of Oblak or ter Stegen would be more natural fits and I’d prefer either one of them but there is a lot to like about Pickford.

He’s English already established despite being still only 24 and he carries a lot of Premier League experience. Mourinho tends to prefer older, ready made players but is on red alert.