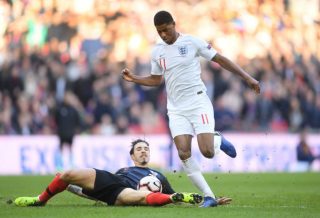 Marcus Rashford has played more games for England in a single year than anyone since 1966.

On Sunday, the Manchester United forward equalled a 52-year-old record set by Jack Charlton for making the most England appearances in a calendar year.

According to The Times, Rashford has represented his country 16 times since the beginning of 2018, the same amount of times as Charlton for 1966.

To be named alongside a World Cup-winner in the history books for your country is a remarkable achievement, and it shows how important he is to the current England side.

Though it must be said that United manager Jose Mourinho must do more to get the best out of Rashford. He looks a totally different player when he plays for the Three Lions, which doesn’t reflect well on the current United team.

England reached the World Cup semi-finals this past summer and the introduction of the UEFA Nations League has contributed to more internationals. That said, Sir Alf Ramsey’s world champions played 17 matches in 1966 – the same amount as Gareth Southgate’s men this year.

Rashford is without question a prominent figure for England. He started in Sunday’s 2-1 win over World Cup finalists Croatia, but was replaced by United teammate Jesse Lingard in the second half.

Lingard came on and started England’s comeback after going a goal behind against the run of play.