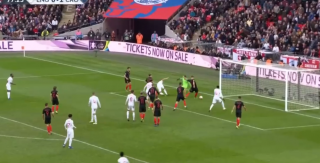 After coming on as a second half substitute, Jesse Lingard scored an equaliser for England against Croatia.

The Manchester United midfielder has now scored two goals in as many games for the Three Lions, after netting a screamer against the United States during the week and a tap in now against the Croatians.

Marcus Rashford looked disappointed as he came off for Lingard, but it proved to be the right decision by Gareth Southgate.

READ MORE: Only right that Ashley Young takes a pay cut at Man Utd if given a new contract

The scoreline is currently 1-1 but a scored draw is not enough for England. They now need a second to top their group, ahead of Spain, in the UEFA Nations League.

Croatia scored the opener against the run of play and England have been trying to turn it around since then. And, if it wasn’t for Lingard’s goal the remaining minutes wouldn’t have us all on the edge of our seats.

The World Cup finalists are without star man Ivan Rakitic in midfield due to injury, but can England take full advantage?

Lingard looks like he will be returning to United in top form after the international break.