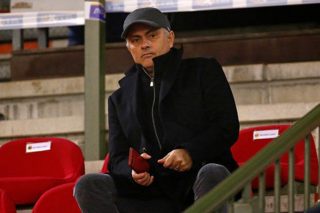 Jose Mourinho was spotted at Belgium’s international friendly with Iceland, so the question that did the rounds on social media was who is he playing most attention to?

We can have no doubt it was a scouting trip. Instead of sending one of Manchester United’s scouts, Mourinho went trusting his own pair of eyes rather than judging by a report written by someone else.

Managers don’t get to scout very often because they’re too busy with the first team. Some would like to do it more often, others perhaps prefer to leave it to the actual scouts.

Mourinho has a better idea of what he needs than anyone and according to the Evening Standard, he was at the game on Thursday night to watch Tottenham defender Toby Alderweirld.

With Romelu Lukaku and Marouane Fellaini absente through injury, it was clear Mourinho wasn’t there to keep an eye on one of his current players.

The report from ES states that Mourinho is in the market for a top class centre-back in January – and Alderweirld, it is understood, fits the bill.

It is also stated that Alderweireld will be available for £25.4 million next summer, which ought to see United try to find a compromise in January.

If United don’t sign a new centre-back or a defensive midfielder in the winter transfer window, this season will just drag on…