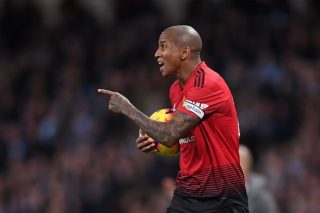 This is not intended to be harsh on Young, but it’s hardly ground-breaking news that he is willing to take a pay cut in order to get a new deal at Manchester United.

Just because he plays every week doesn’t mean we shouldn’t be trying to move forward and improve by ensuring full-backs play at full-back rather than shoehorning players into different positions.

For the last few years Antonio Valencia has played at right-back and, even when he played well, it was still far from ideal for United not to have an adequate out-and-out full-back in the role. At least at left-back, Luke Shaw is making the position his own.

It has emerged from The Sun that Young is in talks with United over a 12-month extension and is willing to take a pay cut.

Young has been a good servant to the club and the board is right to offer him an additional year, but why is there such a fuss about his willingness to receive less wages each week? It’s only right considering Young is approaching the end of his career.

Would he get into any of the top six sides at right-back?

No, so while it would be a good idea to keep the England international around as an alternative option or a substitute, why have United become a club settling for mediocrity? The issue roots from many areas — including this one.