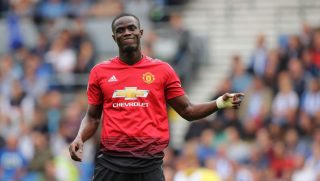 According to Corriere dello Sport, cited by The Metro, AC Milan ‘approached’ Manchester United about Eric Bailly with the hope of signing the Ivory Coast international in January.

This comes shortly after the Daily Mail brought it to our attention that Paris Saint-German had joined Arsenal and Tottenham in the race to sign the defender.

Considering his game time has been cut again this season at Old Trafford, it shouldn’t come as a surprise that Bailly’s future at United is covered in doubt but Jose Mourinho hasn’t exactly got the best selection of defenders, and the former Villarreal centre-back is arguably the best he has…

READ MORE: Only right that Ashley Young takes a pay cut at Man Utd if given a new contract

It is telling that Bailly has not started a game for the Reds since the start of October, with Mourinho opting for a pairing of Chris Smalling and Victor Lindelof instead. And while the Swede has done well in the role, improving week-by-week, it’s mind-boggling that Smalling is still starting games for the most successful club in English football.

No wonder we’ve dropped from superiority when you put it like that. A matter of sheer mediocrity.

United should aim to bring in one of the world’s top defenders regardless of what happens with Bailly.

Football Italia cited various reports linking the Reds with an £80 million move for Napoli centre-back Kalidou Kouilbaly, though it has also been suggested that the Serie A outfit will demand closer to £90 million for his signature.

Another name linked with United is Inter’s Milan Skriniar, as per The Sun, and he too would make a massive difference in our back four. Though whatever happens, Bailly deserves another chance in the team and Mourinho needs a new world-class defender.

It would be a shame to give up on Bailly when the likes of Phil Jones and Smalling have got chance after chance for years at United.