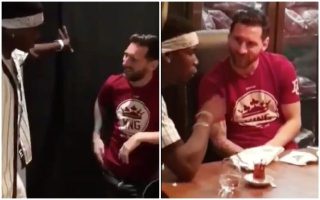 Paul Pogba and Lionel Messi are both enjoying some time off while their teammates are on international duty.

So, what else to do with their time than jet off to Dubai for a brief holiday?

The Barcelona star has not rejoined the national side since their woeful 2018 World Cup campaign and that has resulted in fears he could call time on his international career, though Argentina coach Lionel Scaloni feels Messi will return, as per Sky Sports.

Pogba, on the other hand, is nursing an injury after missing the Manchester Derby. Along with Manchester United in-form teammate Anthony Martial, Pogba pulled out of the French squad to recover from a knock.

The footballing pair were spotted at Salt Bae’s Turkish steak house, where they took up the opportunity to catch up, as seen in the video below.

It difficult to make out what they’re saying to one another, though the Metro claim that Pogba was referring to a France chant about Messi and N’Golo Kante.

Here’s a line from the alleged chant: ‘He stopped Leo Messi’.

Goal were quick to claim the meeting fuels the Pogba to Barcelona stories, which, to be fair, is rather predictable. These reports have done the rounds for months despite Pogba not proving, in our opinion, that he’s a Barça player.

But perhaps in the Spanish league will suit him more than English football?

Paul Pogba and Lionel Messi in Dubai this evening. Messi to United is on. #AgentP pic.twitter.com/uFhxSbliba

I wonder what language Messi and Pogba are using 🧐 pic.twitter.com/s6XquJQRbY

Lol its should be AgentM who convincing pogba to barca