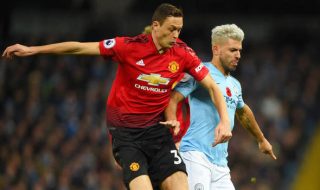 In his debut season, he looked imperious. Every game was a masterclass in controlling possession and protecting that lightweight back four behind him.

This season though, he’s about as painful to watch as ya dad feeling ya mum up!!

No pace. No vision. No control. His movement and mobility is bad enough that I’m pretty sure he’d get the same levels of disability benefits I get!!

How the City gulf feels…..

It’s like Apple and Blackberry. Through clever product development Apple launched successfully into to a market Blackberry had huge experience of success in. Blackberry initially kept pace through experienced management and knowing how to play the game, but the more Apple invested, and the more Apple developed in the market, the closer and closer to obscurity Blackberry came until it was just utterly obsolete.

It’s soul crushing how easily I can see United as the Blackberry in this scenario. We’re years behind city to the point where we share the same industry, but we’re so far behind a thing we once bossed, that it’s impossible to see how we’ll ever be on their level again.

I do politics about as often as a vegan has a mixed grill, so here goes…

If you ignore the fact that the leader of the UK couldn’t arrange a mugging on Merseyside, it’s almost hilarious.

I often question if anyone is shitter at their job than Antonio Valencia. I thought no one could be, but May is proving herself more than capable of taking that crown off him.

Every time she’s even asked about the progress of negotiations, she looks as out of her depth as Gemma Collins would on Question Time.

It’s quite tragic that she sees none of this. She’s deeper in denial than United are in debt.

I’d laugh at how ridiculous this all is if we weren’t about to be financially and emotionally done up the wrong’n by her many many failings to make this happen on terms that don’t destroy the people she is supposed to be looking out for the best interests of.

I’ve further entertainment here for you if you wanna click below now you’ve read this far.