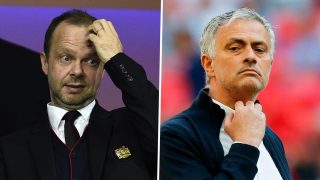 The international break is upon us again and with this it is time for everyone to plan for their football free weekend and spend time with families and loved ones and do those jobs they have been putting off. This seems like United are at the crossroads (in my head plays the song of the same name, the Bone Thugs-N-Harmony version not the rubbish Blazin Squad version) and the board need to decide whether to give in to Jose and unleash his inner b*stard or sack him and get the next victim sorry manager of Manchester United.

Not for United fans though as the last six games since the previous international break are analysed and dissected to the Nth degree. So, Manchester United played six games over all competitions with 3 wins (Everton, Bournemouth and Juventus) one draw (Chelsea) and two defeats (Juventus and Manchester City) so a good return on some difficult fixtures and if Chelsea had not equalised so late on the mood would be a lot more upbeat. Unfortunately, as long as the results are positive then criticism is minimal but with the loss to our neighbours and rivals City, the negativity seemed to wash over social media like a Tsunami of hashtags, memes and expletives.

Jose Mourinho’s post-match comments, as per Sky Sports, certainly didn’t help him in any way shape or form but a few days previous I looked at Mourinho’s behaviour at full time in Turin like looking in a window to ‘The Special One’ over a decade ago in his arrogant, bullish best.

I looked at that result and was reminded of a result Sir Alex Ferguson got against Juventus in the 97/98 season. They had beaten the Italian giants and won 3-2 with a late Ryan Giggs goal and Ferguson used this as a springboard as Juventus were the benchmark in Europe. They dominated the continent and their team was the envy of everyone and even Sir Alex Ferguson was in awe of Marcello Lippi, as Jonathan Liew alluded to in a recent piece for The Independent. The point was to believe they could win and beat the best as they were on the path to achieving greatness as they did the next season.

A late own goal won a game where United had to defend well and try to stay in the game against a vastly superior Juventus team. They went behind and changed the game up tactically and scored two late goals to earn a huge result for the players and the club. Similar to the game I mentioned previous, it would be about belief to a lot of these players in the sense of they could achieve and go to one of the biggest teams in the World and come out with a win. But all that confidence and momentum fell apart at the Etihad a few days later.

So, then the Manchester Derby and when Paul Pogba turned up at the Etihad in a suit and the line-ups were announced I thought this could get ugly. If you wanted to know just how far away United were from winning that game in the eyes of the bookies, they were around 7/8/9 to 1 to win with different bookmakers (biggest odds for Manchester United I have ever seen). This showed the shift and it showed the gap between the two teams was almost like they were playing a different sport at times.

The game ended 3-1 and it could have been more, but the manner of the defeat led to outpouring of anger to the players and manager. ‘Jose out’ followed by sell player X/Y/Z dominated social media although when United lose it is more Anti-Social media, going into the international break means fans have to fester on that last result until the 24th against Crystal Palace.

In international breaks it does seem players are free from the shackles of club media officers and talk more openly about their form/teams/managers and more importantly their futures so keep an eye out for that. The club look like they are going to give one-year extensions to Ashley Young and Antonio Valencia while they look to tie down Ander Herrera, Juan Mata, Chris Smalling and Phil Jones. When I read Jones and Valencia next to contract extension I could feel myself burst out laughing as I am beyond rage at the foresight of the club at times.

This predictably went down about as well as you would expect with numerous fans upset and angry the club seems to prioritise sentiment over progress. Also, while we are on the subject of players can anyone tell me when Andreas Pereira turned into prime Pirlo? As I have seen lots of fans and one particular independent “Fan” Channel say him being in the team would help solve our midfield issues is something I have dubbed the Kagawa effect, or simply put he becomes better the more he doesn’t play. When did he become the answer to the midfield conundrum? I feel my invite to that meeting must have been lost in the post.

Now on to the manager, after his gesture at the final whistle in Turin saw many fans including myself look at him and say that is the Mourinho I want to see. Many will say he is not what a United manager should be, but I would much rather have him at his arrogant pantomime villain best than someone who talks about having fun while drawing a match against a rival and pats rivals heads when they try against them.

There is an old joke that non-United fans have two favourite teams and they are their own team and whoever is playing Manchester United that weekend. Mourinho operates best under a siege mentality and guess what so do Manchester United. The club has been hated for decades because of our money and our success so now when other fans say the feel sympathy for us, this should be the biggest wakeup call as we are no longer a threat. If Pep is the white knight of the Premier League then we need Jose to be the Dark Knight, the Rolling Stones to his Beatles or for a more Mancunian reference the Stone Roses to Pep’s Oasis.

Ed Woodward and the United board have to give Jose full control over recruitment and transfers or sack him if you don’t trust him. Personally, I would back him and let him bring in his players and put his mark on the squad instead of the half-arsed approach currently being operated at the World’s richest club. Very few are privy to the inner workings of transfer dealing in the corridors of power at Old Trafford, so it is hard to say for certain who signed who or who vetoed who for transfer targets, so we can’t say for definite whether this is joint venture or a power struggle between the Football and Business sides of the club.

We need less of the Superstars on big money and recruit players with not just the talent but the character and the guts to embody the values of the shirt that we as fans have. Clubs who recruit well focus on the needs of the team not which country shirt sales are falling and sign a player to solve that problem, if United don’t buck up they could follow the examples of fallen giants Inter and AC Milan who’s transfer dealings and some of the greatest players to wear the shirt were not big money signings or come with much fanfare. Their talent made them great, but their spirit and character made them so much more to the fans.

On the pitch the results will take care of themselves this season as we will finish where we deserve to. I do think that the club as a whole need to make a clear decision on the direction we go in. Either we sack Mourinho and bring in a coach that is willing to work to a philosophy and towards a style of play and certain remits from the board or trust Jose and tell him to build a team that will fit his template that has brought him success where ever he goes. I am well aware of his shortcomings at all his clubs, but he did win numerous trophies wherever he went as well.

I would love to see a fired-up Jose get a team he can put out against the best in his own image and style and see how it happens. Once he tightens up the defence and fills the big gaps in our team I do think that we will be right back where we belong, but whether he will or not does depend on the board and in my opinion they seem to be prepping for a sale with the tightening of funds and rolling out extensions for players rather than paying them to leave the club when their contracts expire. Also, with pictures of Richard Arnold and Avram Glazer in Saudi Arabia emerging only add fuel to the rumours of a big sale.

MR Avram Glazer today during an informal visit to HE my father Moh. Abosak in Riyadh, Saudi Arabia.

None of us really enjoy the international break but we shouldn’t be too downhearted after one bad result and I know it is the derby, but we are so far from being the best again it might get worse before it gets better. Someone needs to steer the club in the right direction, be that Jose or the board but it needs to be done quickly. I was upset on Sunday but not too downhearted as there is a long way to go in the season. Before anyone trots out the old We are Manchester United line and that we never get beat or outplayed, we do, and every club does even Ferguson got his share of heavy defeats and that didn’t stop us being the best team, but I think the road to get back to the top is long one. But I for one will be behind United all the way.