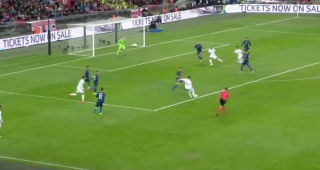 Jesse Lingard opened the scoring for England against the United States with a stunning strike from the edge of the box.

A typical Lingard goal as he swerves the ball around the goalkeeper and into the back of the net with incredible technique.

England’s clash with America is only a friendly and it will feature United legend Wayne Rooney at some stage as he signs off on his international career.

But what a fitting way to start the night with a fellow Red scoring a cracker.

He capped it off with one of his infamous celebrations too! Lingard is very much the centre of everything happening for England tonight.

Hopefully, the night ends with Wazza getting his name on the scoresheet. What an incredible career he’s had – not just for club, but country too.