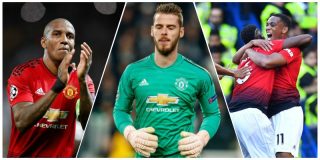 On the face of it, Manchester United have quite the dilemma this summer when it comes to renewing contracts. To name a few, Mata, Herrera, Valencia, Young, Martial and De Gea all have contracts running down this summer.

It’s up for debate who deserves a new deal. Some players seem to have run their course with the club and should get a send off worthy of their contribution. This is the opportunity to move some players and the club on now. Ashley Young arrived at the club as a winger and will eventually leave as a full-back. His time at the club should be remembered for his Premier League medal winning contribution in the 2012-2013 season.

A mainstay and trusted player for Louis Van Gaal and Jose Mourinho at both full-back positions and now captain seem to show the current state of affairs at United. A player that is clearly not good enough but experience and professionalism have given Young a place in The Reds defence.

Copy and paste the same circumstances for Antonio Valencia. Although, it could be argued that Tony V has been a more steady influence at right-back he has always, like Young, played like a winger converted to full-back. He has been temporary measure that has turned in to a permanent fixture. We have missed specialist full backs and if any club has highlighted the importance of that position it has been our city rivals. Mocked for spending £130 million (via Goal) last summer on Walker, Mendy and Danilo, all have contributed to their rise last and this season.

David De Gea. The best goalkeeper the club has had since Peter Schmeichel. Yes, Edwin Van Der Saar was excellent but he was in great teams. If we ever needed to keep one player then it has to be Dave. It’s the most important signing the club can make right now. There is no doubt that this guy should be the highest paid player in the team. Who has been more consistent or important in the post Sir Alex Ferguson era? No one.

Can you imagine how much he would cost to replace? So why not throw every financial resource behind his new contract? He seems like the natural choice to be captain and he isn’t going to be a player to be burdened with that responsibility. It’s now in the club’s hands and you can’t feel confident judging by their recent dealings with recruitment.

Juan Mata has never played much in his natural position for the Red Devils. Mata always seems more comfortable as an attacking midfield (number 10 role) but has played most of his career from the wing.

A player that has made the most out of playing out of position and never seems first choice despite his contribution. United don’t have another player like Mata. A little maestro who keeps possession, is creative and has an eye for goal. His free kicks aren’t bad either.

Juan has never really nailed down a place but in full flow is a delight to watch. He clearly loves the club and it would be real shame to let his talents be appreciated elsewhere. An underrated talisman is something the club could do with right now given the right opportunities in the right position. Mata’s performance away to Chelsea this season, in his preferred role, was one of the catalysts for our improved performance. Sadly, he hasn’t played their since.

Apart from his start to life at Old Trafford, Anthony Martial has never been in better form for Manchester United. Martial has scored in five consecutive games and is finally looking like the player we all hoped he could be. A tough start under Mourinho and seemingly looking like he was heading for the exit this past summer, Martial has turned it all around. Last season he looked disinterested and failed to deliver when given the chance.

Alexis Sanchez’s arrival did him no favours and seemed to knock the wingers confidence.

Under Louis van Gaal playing as striker the goals flowed and his swagger was at an all time high. Martial was then deployed on the left wing and his form was patchy at best. Flashes of brilliance in one part of the game followed by inconspicuousness the next.

If this current form is to continue then Tony Martial who came from France needs to be signed to a new deal. At 22 years of age and at a cost of around £50 million it really would be neglectful but not surprising of the club to let his talent go somewhere else.

I know we can be generous in our praise when someone leaves the club but right now is the time to let some players go. If we are going to move forward it’s time to let the past die and give others a chance to prove their worth. We have some great potential and talent in our current squad like Andreas Pereira, Diego Dalot and Fred who need more time on the pitch to prove themselves.

United are at a crossroads now and the club needs an overhaul. Going back to the same players that have not produced for so long now and not going to improve seems like a waste of squad space. Is the team going to improve with Ashley Young and Antonio Valencia at full-back? Of course not. So why not try something different with what we already have?

I’m not saying it will improve that position or the team instantly but let’s try it and see. It really can’t be any worse than it already is.

The club has been progressive commercially so why can’t we be when it comes to the team?

The foundations are there so why can’t we build on them?