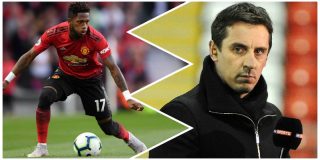 Gary Neville has criticised one of Manchester United’s recent signings for failing to justify his expensive price-tag just months after being introduced to English football.

He was speaking about Brazil international Fred on the latest Gary Neville Podcast.

Fred joined United in the summer for a fee reported to be worth £52 million, according to The Independent.

In the Premier League this season, Fred has made just 6 appearances as listed on WhoScored. That’s not enough for a new (and expensive) signing to really make a mark, but perhaps he’s not winning manager Jose Mourinho over in training to warrant a place in the line-up?

Without being on the training ground each morning, it’s hard to really evaluate why certain players don’t seem to get a look in, and some fans assume they see enough in 90 minutes of action once or twice a week.

On his podcast, Neville expressed his views, as quoted by Mail Online: “Fred at £60 million, he started the first game of the season and he looked bright, he looked tidy – but does he look like what you would expect for £60 million?”

It could be argued that Fred hasn’t had a long enough run in the team to adjust himself to the English game, and his exclusion from the line-up against Manchester City last weekend when United were without Paul Pogba in the midfield has put pressure on the Brazilian to deliver.

Pressure follows you everywhere at United, but Fred deserves more time to get his United career on track. It just depends on whether Mourinho sees him as another dud signed by his employers…

It doesn’t help that Fred has joined a side constantly being criticised and going through a difficult period, though it’s too soon to write him off completely.