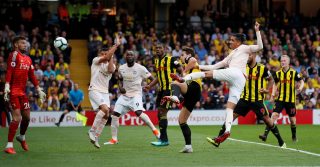 Everton are said to be interested in signing Manchester United’s Chris Smalling on a Bosman at the end of the season.

That’s according to The Sun, who claim Everton manager Marco Silva has had scouts watch Smalling in action this season. It is beyond our imagination how any positivity could feature in their scouting reports as the England international has been bang average.

Smalling, who hasn’t become the defender fans thought he would after arriving with real promise from Fulham in 2010, arguably wouldn’t be considered a loss at United because the aim between now and next season must be to significantly improve the defence.

Worryingly, The Sun also report that Smalling wants an improved contract at United despite currently earning £90,000-a-week at Old Trafford.

Whether or not he leaves at the end of the season on a free transfer, it’s not going to be a huge blow to see the 28-year-old playing for another Premier League club.

The Michael Keane ship has sailed. United need to go into the transfer market and buy real class to bolster Jose Mourinho’s defence. Defenders such as Kalidou Koulibaly and Milan Skriniar – two of whom are playing in the Serie A.

Manchester Evening News claim Koulibaly is understood to be open to a move to England and reportedly a United target. As for Skriniar, Goal reports that the Slovakian is negotiating fresh terms with Inter Milan.