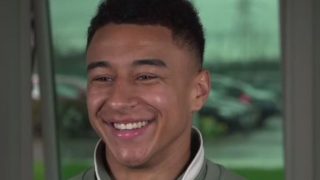 There is a lot of excitement surrounding England international Jadon Sancho at the moment.

Formerly of Manchester City, the Englishman decided to move to Borussia Dortmund for the good of his career, as reported by Manchester Evening News in October.

The 18-year-old has impressed at club level in order to get a call up to the England squad, scoring five goals and providing six assists in 17 appearances for BVB.

Joining up with the England squad will be a new experience for Sancho. It may take some time getting used to his new teammates and coaching staff, but it looks like he’s settled in quickly with some help from Manchester United midfielder Jesse Lingard.

You can see in the clip below (via Lingard’s official Instagram) Sancho imitating the United star’s celebration, with Marcus Rashford also featuring in the video.

After making its way on social media, a few eager United fans were quick to urge Lingard to persuade Sancho to join him at Old Trafford. That would aggravate a few across the city!

However, to add fuel to the fire, The Express noted United’s alleged interest in Sancho earlier this week.

Time will tell if Sancho is ready to return to England, but in the above MEN piece he reveals how difficult it has been to leave several members behind whilst in Germany.

Below are tweets from United fans trying to persuade Lingard to act almost as an agent to bring the Bundesliga starlet back to Manchester.

Convince him to come here

Excellent tapping up Jesse keep at it

Jesse u know what to do