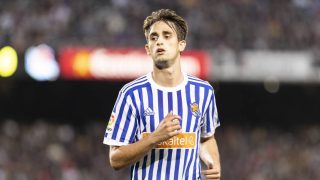 The Belgium international boldly claims Jose Mourinho forced him out of Old Trafford because the manager is allegedly more concerned with making big-name signings.

That’s quite a statement from a player who was given opportunities at United prior to Mourinho’s arrival, but was unable to cement a spot in the starting eleven. For too long Januzaj remained a prospect and he became one that stalled development wise.

Januzaj joined Sociedad permanently last January and has since gone on to make a total of 20 league appearances, in which he has scored 3 goals with 6 assists. That form hardly suggests he’s pulling up trees in Spain, so what makes Janzuaj think he had the quality to make it at United?

We have enough players not good enough as it is…

“I didn’t really get a chance because at the time he (Mourinho) probably wanted more experienced players with names,” Januzaj told Sky Sports News.

“I had to move on and now I am happy in Spain and making a difference.

“I always knew I had the quality to play for Manchester United. I know what I am capable of.

“They didn’t give me a chance but it’s not a problem. I am happy in Spain and enjoying my football.”

Let’s not forget how Januzaj joined Dortmund on a season-long loan from United in 2015 only for the agreement to be cancelled halfway through the season after he made just six appearances.

Manager of Dortmund at the time, Thomas Tuchel, then said Januzaj failed to show the necessary desire during that period, as reported by ESPN.

So, Januzaj will put his failure to kick on at United down to Mourinho rather than accept he didn’t have what it takes to make it at a big club.