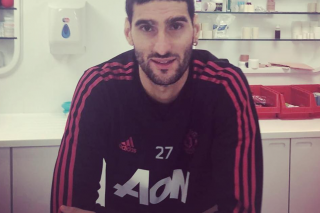 The Manchester United midfielder has changed his look as he turns his attention towards improving the club’s form this season after what has been a difficult start.

Jokes aside, Fellaini’s previous barnet must have been an inconvenience – just like he is for the opposition when on the pitch.

READ MORE: Man Utd aim to tie 33-year-old down to new contract before the new year

Now they have a greater chance of seeing over Fellaini’s head without a giant bush getting in the way.

Whatever you think of Fellaini, the Belgian’s substitute performance against Juventus a week ago was faultless. He didn’t get many touches on the ball but the Juve defence was wary of his presence.