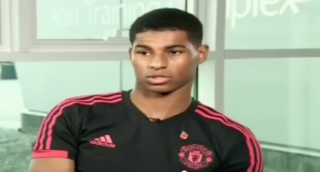 Marcus Rashford has appeared in an interview for Premier League Fanzone where he opens up about what Jose Mourinho said to the team at half-time when trailing 2-0 against Newcastle, back in October.

Manchester United went out in the second half to claw back into the game and win 3-2 thanks to goals from Juan Mata, Anthony Martial and Alexis Sanchez.

In the interview, Rashford is asked about his favourite moments since becoming a member of the first-team.

He also opens up about which players we should watch out for in the U18 and U23 teams, while revealing the players who give a lift in the dressing room after a defeat.

Rashford was just 15-years-old when he started training with the U18s and he recalls how James Wilson was banging in the goals at the time. Wilson, however, is currently on loan at Aberdeen.

Another question quizzed Rashford on what Mourinho said during half-time before United came back in dramatic fashion to beat Newcastle 3-2 at Old Trafford.

Rashford has made five Premier League appearances already this season, scoring two goals and creating one assist, as per WhoScored, but missed a few games through suspension after getting sent off against Burnley.

Currently away on international duty, Rashford is in line to face the United States and Croatia before returning to United.