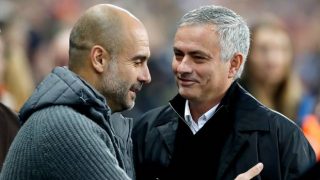 As much as we would like to agree with that statement, it would take a severe amount of intoxication for us to muscle up a reason to suggest Mourinho is better than the likes of Pep Guardiola.

Guardiola won the Premier League last season with City and has his team flying again in the current campaign, while Mourinho’s United are miles off and were beaten comfortably in the derby on Sunday.

However, Maradona has had his say and he feels the current United boss is the world’s best coach.

“I would give Pep the merit of taking advantage of the launch that Johan Cruyff gave him.

“I have said on more than one occasion that tiki-taka was not invented by Guardiola. It was ‘Flaco’ Cruyff.

“At the moment Pep is able to choose any player in the world that he wants. That way tiki-taka is easier.”

Guardiola has been a success whenever he’s been and, yes, those clubs were all able to back him in the transfer market with the best players but Mourinho has spent fortunes too. A lot of it on unconvincing signings from his time at United.

Maradona, on the other hand, is currently in charge of Mexican second-tier side Dorados with aims to improve as a coach. And one method to improve, according to the man himself, is to go to Manchester and spend time with Mourinho.

“Myself as a coach I need to learn a lot and for that reason I think I will go to Manchester and Mourinho to ask him a lot of things,” he added.

“Because he is the best without doubt.”