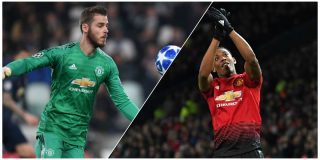 According to The Telegraph, Manchester United are still struggling to convince David de Gea to sign a new contract at Old Trafford.

The Independent made claims on Tuesday that United are in talks with Juan Mata, Ander Herrera and Ashley Young over agreeing to fresh terms, with all of their current deals set to expire next summer.

But, as the story goes, De Gea is not keen enough to commit to another contract “despite United’s willingness to offer him around £275,000 a week” and he could leave on a Bosman at the end of next season.

When you consider the Spaniard’s options, he could easily join another club and win silverware while United continue to struggle their way through mediocrity. It’s an achievement in its own right that United have kept hold of De Gea this long…

Though the thought of having to replace the best goalkeeper in the world is a cruel one, but one day we’ll just have to move on. That’s probably when the United defence really collapses unless improvements are made soon. (Don’t hold your breathe)

Meanwhile, James Ducker adds to his piece in the Telegraph that Anthony Martial has been offered a new five-year contract and the club is sitting patiently for the former AS Monaco striker to sign it.

Martial has hit top form this season and looks like he’s eating Mourinho’s words from the summer after the manager was willing to get rid of the 22-year-old, as per The Metro.

In an ideal world, United would be able to tie down both players to new contracts for the long-term future but we’ve stooped low since the good times.

De Gea knows elsewhere he would be fighting for league titles or maybe even the UEFA Champions League. At United, it’s not guaranteed we will qualify for the latter.