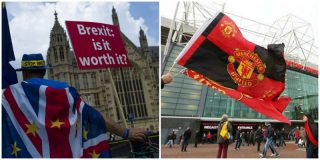 It sounds like Brexit could have further consequences for big clubs in the Premier League.

According to a report in The Times, the Football Association is planning to reduce the number of overseas players in top-flight squads to 12 from 17.

A proposal will be sent out to all Premier League clubs about the Brexit themed plans this week.

Manchester United currently have 14 foreign players, while City and Tottenham would be affected the most with 17 players not from the UK.

The big clubs won’t be in favour of this, though it would force them all to have a more strategic outlook on signing and selling players.

Buying ‘for the sake of it’ would be less common and there’s also an argument that the England national team would benefit as a result of having more homegrown footballers playing regularly in the Premier League.

But how then will the English clubs compete with the best in Europe when it comes to the UEFA Champions League, especially if the clubs in question can’t strengthen their squads without worrying about quotas and having to bridge the gap between homegrown and foreign players?

And, what happened to wanting the Premier League to be the best league in European football? That is going to be harder to achieve if blocks are put in place to prevent clubs signing the best football talent across the world because they may already have too many foreign players.

Some will argue the current number of foreign players allowed (17) is strict enough.

As it stands, United have only two foreign players more than what the said quota will allow for, but Jose Mourinho may not want to cut his current squad. It could be the case that he’d rather increase the size of his squad by signing talent from around the world rather than pick solely from the UK…

This may even make managing in the Premier League less appealing, frightening away the best coaches who will prefer working in countries with less ruling over what they can or can’t do in their jobs.

On another note, this may also add another reason as to why Mourinho wants Ashley Young to agree to fresh terms despite the left-back being on the wrong side of his 30s, though it makes less sense that he’d want Ecuadorian Antonio Valencia to do the same, as reported by The Guardian’s Jamie Jackson on Monday.

The proposal is likely to spark debate over the coming days.