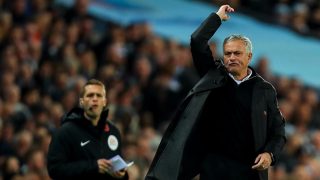 Manchester United are currently eight in the Premier League after what has been a dismal start to the 2018/19 season.

And, Neil Ashton of The Sun claims manager Jose Mourinho faces the axe unless United qualify for the UEFA Champions League.

That would suggest United chiefs are already talking about the likelihood of Mourinho not meeting this season’s objective, which should have been to challenge City to the title and stop them winning it two-years in a row rather than settling for top four.

Ashton adds that Tottenham manager Mauricio Pochettino is a popular candidate to take over from Mourinho should the Portuguese coach fail to secure Champions League football for next season.

He notes that there is a penalty clause in Mourinho’s contract should he get the sack – costing “around £15m” — so the hierarchy will consider the worth of sacking/replacing the former Chelsea manager before pulling the trigger.

Meanwhile, Sam Pilger claims United are running out of patience with Mourinho, as per Forbes.

While his mistakes shouldn’t go under the radar, it will take a complete overhaul to fix the problems at Old Trafford. Ed Woodward shouldn’t be anywhere near transfers and this fall from grace was predicted as far back as 2005 when the Glazers made a real introduction.