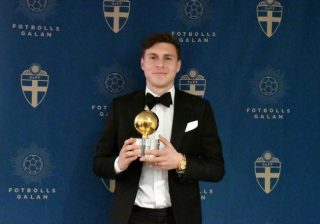 Unlike his Manchester United teammates, Victor Lindelof was able to celebrate on Monday night back in his homeland of Sweden.

The Reds head into the international break on the back of a derby day defeat, though Lindelof had some uplifting news to get him back on track.

Lindelof beat players such as Zlatan Ibrahimovic to be 2018 Swedish Footballer of The Year award.

It’s a remarkable achievement for the former Benfica defender, who wins the same award Ibrahimovic won 10-years in a row.

Lindelof didn’t have the easiest of debut seasons at United but he’s finally getting regular game time into his second campaign as a United player. While it’s early days, he has still has put in a couple of decent performances this term.

Meanwhile, Ibrahimovic has fallen short of winning the award the last two years but at least this time it went to a United player! The MLS striker should be happy to see another Swede getting awards whilst playing for one of his many former clubs.

Lindelof was sure to post about his incredible night on social media.