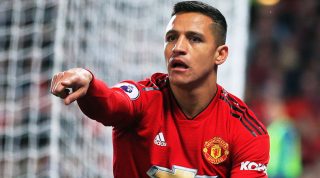 Alexis Sanchez has reportedly been dealt a blow in his pursuit to leave Manchester United.

According to the Telegraph, Paris Saint-Germain are not currently interested in signing the Chile international as they’ve turned their attention towards singing younger players leaving “the club and Alexis Sanchez fear they are stuck with each other.”

It shouldn’t be a surprise for anyone that there isn’t a list of clubs chasing Sanchez’s signature considering how poor he’s been for United and he’s earning a whopping £500,000-a-week at Old Trafford, as per the Express.

Sanchez, 29, has never looked set to replicate his peak form from his Arsenal days, back when he was renowned as one of the best attacking players in the world.

That’s the player United thought they were getting by giving the Chilean a new lease of life at a bigger club, though he’s been unable to deliver when it matters most.

With life not going to plan in Manchester, as reported by the Manchester Evening News, Sanchez is allegedly keen to move elsewhere to get his career back on track again.

However, the report by James Ducker of The Telegraph also suggests that there is a possibility of a loan, but that doesn’t benefit either United or Sanchez because once the loan spell ends he’ll still be our player.

And, by going on loan it’s hard to know if Sanchez will lift his game to the required standard to warrant a permanent switch and we’d probably still be paying a percentage of his ridiculous salary.