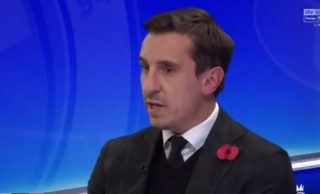 After the derby defeat, Sky Sports pundits Gary Neville and Graeme Souness had a minor back and forth.

Such an engagement will be exaggerated to add fuel to the Manchester United v Liverpool fire, but we do enjoy it.

It was suggested that Mourinho and his coaching staff aren’t getting the best out of the current squad, and Souness was intrigued by Neville’s opinion…

The former Liverpool player was adamant that United fans are not being entertained by Mourinho’s style of football.

Neville argued that this United side play in moments, big times in big games, and the one player that has the arrogance to bring that is Paul Pogba, who was out injured for the derby. He states that this is a great quality and should be encouraged rather than underestimated.

It goes without saying that Souness is currently gleaming over our struggles and Gary is looking at it from a more reasoned and emotional perspective, the same as most of us.

Still, I’d encourage such debate because it makes for good post-match TV.