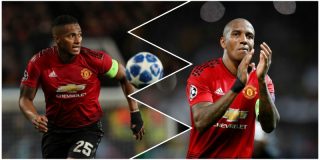 According to Jamie Jackson of The Guardian, Manchester United are in talks with Ashley Young and Antonio Valencia regarding the full-back duo signing one-year contract extensions.

Both players will see their current contracts expire at the end of the season unless extended and this news is likely to see conversation increase about whether or not they deserve new deals.

33-years-old each, Young and Valencia have represented the Reds as captains in recent years and are now seen as squad veterans. It’s been seven years since the former joined United from Watford, and Valencia is approaching an incredible 10-year milestone.

However, Valencia hasn’t had a good season thus far, and Mourinho criticised the Ecuador international after he returned form holiday out of shape, as per The Metro. Footballers are free to enjoy their off-period but in this day and age, those playing at the top need to take more caution.

The former Wigan winger also appears to have lost his legs. Whenever he’s played this season – four Premier League appearances, according to WhoScored – he has struggled to get up and down the line, which would explain Mourinho’s reason for playing Young at right-back instead.

That said, Pep Guardiola’s Manchester City identified Young as United’s weak link at the beginning of Sunday’s derby. Though perhaps it’s unfair to expect a player of his age to perform away at Juventus and City over the course of four days, but why not give Diogo Dalot another run in the first-team to give Young a chance to rest?

Clearly, Young is not an ideal choice at full-back – whether it’s on the left or right – and United accepting makeshift options year after year may be contributing to an inadequate goal difference in the Premier League (-1) this season.

So, is it the right idea to give Young and Valencia a one-year extension each?

The Guardian’s report states that “Mourinho is keen for both to stay,” however, we don’t necessarily agree.

Genuinely, I can understand giving Young one more year as long as it doesn’t mean he’ll be starting games again next season. He’s a squad player at best.

As for Valencia, this should be his last season. No ifs, buts or maybes. United tend to hold on to deadwood for far too long and while Tony V has been a good servant to the club, his time has come and gone, therefore I think handing him a new deal would be a waste of time.