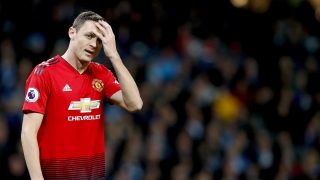 Manchester United players have allegedly become tired of Jose Mourinho’s treatment of Nemanja Matic, who seems to playing each week regardless of poor form, according to The Times.

The report claims that there are concerns among United players that the manager supposedly won’t consider dropping the player.

Matic, 30, looks like a player either exhausted or finished and despite playing Andreas Pereira in a holding role earlier this season, there are growing fears Mourinho won’t give someone else a chance in the team.

They obviously have nothing personal against Matic but after signing Matic from his Chelsea (the third time Mourinho signed the Serb), tensions are apparently on the rise in the dressing room due to favouritism.

It must be said the Serbia international performed well throughout last season, though 12 months on the he looks to have aged years and we’re paying the price by playing him every week.

United may have a dire recruitment record, more so in recent years, but the club really should be planning forward by scouting alternative options before the summer.

Moreover, it shouldn’t be the case that United have to replace a signing made just over a year ago by diving back into the transfer window.

Matic the biggest example of how outdated Mourinho’s management is. You don’t sign 30 year olds. For this reason. We got 4 months out of him. Now he’s deadwood. More deadwood.

The players said to be complaining about this have a point. There wouldn’t be a problem if Matic was regularly producing high quality performances.