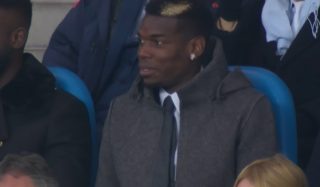 As poor a Derby performance as I can remember. Even in the 6-1 United showed more desire to win than today, and City not at their best humbled Mourinho’s men and showed them to be so far off the pace it’s becoming embarrassing. It’s going to be a long 2 weeks, and maybe an even longer season. Here is what we learned against Manchester City.

No Pogba, no party

He gets an awful lot of stick does Paul Pogba, but yet again United proved that without him in the middle of the park there is absolutely no creativity what-so-ever. And further to this, he shields the very poor and ineffective Nemanja Matic rather well and almost masks the Serbs complete loss of ability. There was no one looking to break the lines with any conviction, no one able to get their foot on the ball and get their head up, or beat a man and earn some space. Say what you want about some of his performances (and he has had some stinkers) but you cannot convince me in any way that United are a better side without him pulling the strings.

Nemanja Matic was supposed to be a coup when he signed from Chelsea last season. Supposed is the operative word here, because barring maybe 3 months at the start of his Old Trafford career, he has been utterly abysmal. I’ve never seen a holding midfielder leave his defence exposed as often as he does, and his ‘defending’ for the third goal was hilarious. He stood still and let the ball float to Gundogan’s feet. He offers nothing in attack, and even less when he’s meant to be doing his job. Ander Herrera was pony today, he lost the ball an astronomical amount, and always in the most innocuous manner. I love the lads passion for the club, but there has to be a better alternative out there. Throw in Lindelof reverting to type after some encouraging displays recently, and a very turgid day at the office was joyfully compounded.

Because I cannot spend my whole time moaning, I’ve decided to try and search for some positives. There aren’t very many at all. Shaw played alright, especially when there was a little spell of pressure at 2-1. He was trying to beat his man and create something. Martial was as lively as he always is, and he needs to be the focal point of the side when Pogba returns, those two linking up together could be a very fruitful partnership. Fellaini deserves a mention for his performance as he really didn’t do a great deal wrong. And the final positive is it was only 3.

Awful, woeful and just generally disappointing. After the high of beating Juventus away, this afternoon was one hell of a return down to earth. There was no creativity, the plan at 2-1 seemed to be to play for a set piece and hope for the best, there was nothing there to give any hope a come back was possible. It was a real eye opener today, and mine don’t like what they’re looking at. Deflated doesn’t cover what my feelings are, and I’m not under any illusions that it’s just me feeling it. International football next, yey.