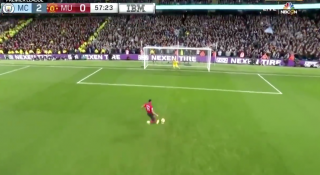 Anthony Martial continues his goalscoring form by netting in the Manchester Derby from the penalty spot.

Manchester United were trailing 2-0 when the penalty was given as Ederson took Romelu Lukaku down inside the box.

Lukaku had only entered the pitch as a substitute. His first touch of the ball saw him took down inside the box.

Questions will be asked of Ederson, who came out in rather clumsy fashion to knock Lukaku from his feet.

Martial took his penalty well, as seen below, but can United come back and take at least a point from this game?

It remains to be seen but we’ve every chance to nick something.

City will feel they need to score another…

Romelu Lukaku makes an immediate impact off the bench by winning a penalty and Martial converts calmly from spot!

Game on at the Etihad!