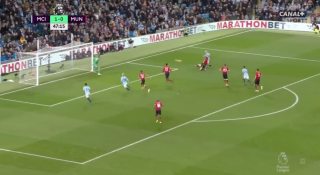 David de Gea’s reactions are usually fast, but this time around they weren’t fast enough to prevent the Argentina international from scoring his 151st Premier League goal.

From a defensive point of view, Victor Lindelof wasn’t quick enough to follow Aguero after the City striker completed a one-two with Mahrez at the edge of the box before driving closer towards the goal.

You would think being 2-0 down will force Jose Mourinho’s hand a little sooner. For instance, the manager has already asked Romelu Lukaku to warm-up on the touchline.

The Belgium international missed United’s last two games through injury — wins over Bournemouth and Juventus — but has a chance now to return with a bang.

Will history repeat itself? Our fingers are crossed.