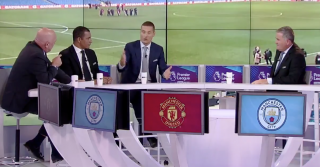 Nemanja Vidic admits he would one day like to manage Manchester United.

The former United player was part of the beIN SPORTS team analysing the Manchester Derby, a game which saw the Reds lose 3-1 at the Etihad.

Richard Keys was critical of Mourinho’s style of football after the match but Vidic, one of the best defenders we’ve seen in a Red shirt, sat on the fence despite agreeing with his fellow pundits that this United side doesn’t play the football that we’re used to seeing from England’s most successful club.

Perhaps more interesting than his assessment of Mourinho is his ambitions to manage United in the future.

It would be a huge risk giving the job to someone who has no experience coaching at the highest level, but there is nothing stopping Vidic from proving his worth elsewhere and going up the managerial ladder.

As a defender though, it will be intriguing to see how Vidic approaches management in terms of adapting to different styles.

Would Vidic be defensive, offensive or a mixture between the two?

It certainly appears that Vidic has become frustrated by United’s football under Mourinho.

However, the current United manager may argue that he was not backed in the summer when he wanted to improve his defence, which has become the root of our problems on the pitch.

The Reds were also without talisman Paul Pogba and had endured a difficult away trip to Juventus during the week, in which they forced a dramatic comeback in the dying moments.

Watch the clip of Vidic admitting he would like to manage United below: