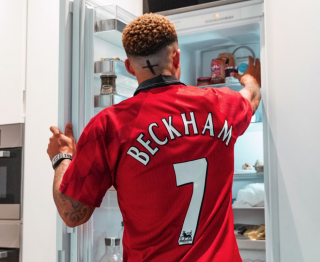 Some will tell you Memphis Depay has resurrected his career since leaving Manchester United for Lyon.

Others, who whistled him off during the week as Lyon gave up a two-goal lead against Hoffenheim in the UEFA Champions League, will tell you otherwise.

But after what was a difficult week for the Netherlands international, Depay scored two goals and provided as many assists as Lyon beat Guingamp 4-2 on Saturday.

That may have contributed to Depay waking up on Sunday morning in high spirits.

The former United attacker has shared a picture to Twitter wearing a retro David Beckham shirt whilst reaching into a fridge.