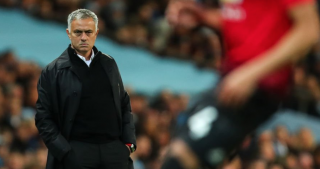 Manchester United were beaten 3-1 at the Etihad on Sunday and Jose Mourinho refused to criticise the performance displayed by his players.

The Reds were without their talisman, Paul Pogba, and had only returned from a different away trip to one of the best football teams in the world.

There was quite a different between both side’s circumstances ahead of the game and City have looked capable of defending last season’s title triumph thus far.

United paid a heavy price for their mistakes and Ilkay Gundogan’s goal to make it 3-1 was the final nail in the coffin. Mourinho’s men pulled one back to make it 2-1 thanks to a penalty by Anthony Martial, though City goalkeeper Ederson wasn’t tested again for the rest of the match.

Speaking to Sky Sports after the match, as per the BBC, Mourinho said: “I think it is not a bad performance at all. It was a performance with mistakes and we paid for it. All three goals are our mistakes. Against a team like City, if you make mistakes you will get punished.

“We had two matches away [Juventus and then City], it is not the physical effort but the mental pressure. I think some of the boys felt it a little bit.

“The first one is a bad one to concede and the second one is even worse. The third goal kills everything.

“Everybody has to agree. It is one thing to go to Juventus and play against one of the best teams in the world for 90 minutes. Another thing to beat Shakhtar Donetsk at home 6-0 and be very relaxed. We arrive in different circumstances.

“We cannot lose the ball the way we did. It is not about David de Gea, it is about the way we lost the ball.”

It will always be frustrating to lose a derby, but after Wednesday’s night victory over Juventus it’s time to reflect on where we realistically see United.

We are not at their standard and, unlike Pep Guardiola at City, Mourinho is not being backed by the board. United can no longer boast a helpful working environment.

Several United plays will spend the next two weeks on international duty.